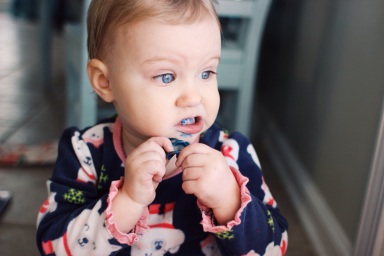 Charlotte’s favorite word right now is “No!” She says it with a deep southern drawl and a vehement shaking of the head. Between her and her big sister, we talk about what it means to obey often. Sometimes when I tell Lydia to clean her room, she will head to her bedroom only to come find me a few minutes later. When I ask her if she has cleaned, she smiles and says, “No, but look at what I brought you.” Then she hands me a crown or a seashell she found stashed in her closet or under the bed. While the gift is sweet–albeit manipulative–it’s not what I asked her to do.

I have a little paint chip book full of memory verses from last year. One of those is 1 Samuel 15:22…

And Samuel said, ‘Has the Lord as great delight in burnt offerings and sacrifices, as in obeying the voice of the Lord? Behold, to obey is better than sacrifice, and to listen than the fat of rams.’

Behold, to obey is better than sacrifice. Just like my daughters, I’ve got a list of reasons I don’t want to obey. Fear. Pride. Comfort. Worry. Reputation. Selfishness. I feel the Holy Spirit nudging me. I know what I need to do, but instead of obeying I reluctantly agree to one more serve role. I heap on one more responsibility and mutter complaints under my breath. I scribble one more commitment on my inked-up calendar. I give away one more night of the week and claim it’s for a good cause. Over and over I feel Him nudging, asking, inviting and I respond, “But God, I can’t do that. Look at everything else I’m doing for you.” I throw my good things back at him, all the while, ignoring the thing He told me to do. Instead of doing what He asked me to do, I assemble a pile of sacrifices as my justification for disobeying.

Most of the time I know exactly what I need to do to obey God, but sometimes it’s a little more obscure. One of the ladies I mentor was facing a situation several months ago and she felt stuck. There were several directions before her and there wasn’t a clear “right” or “wrong” path. As we were talking, I remembered something I had learned as a teenager. Go back to the last thing you know God told you to do and obey it. It might be big or it might be small. It might be related to the decision or it might seem wholly disparate. But, usually, as soon as I think of that advice, something pops in my head and I know what my next step is. My experience has been that every time I obey that first step, God illuminates my next step. I usually beg Him to send down a search light and flood the whole path, but He has yet to do that for me. But every time I obey, He gives me the next direction.

Every morning while the girls and I are eating our scrambled eggs and toast smeared in coconut oil and honey, I read a page from the devotional Thoughts to Make Your Heart Sing. This morning’s devotional came from Luke 17:6 and read…

When Jesus’s friends asked, ‘Give us more faith!’, Jesus told them they already had enough.

Even the tiniest speck of faith–the little bit you have–so-small-it’s-hardly-even-there faith–is enough. Enough for you to do whatever Jesus has asked you to do.

Because it’s not about us and how much faith we have.

It’s about him and how faithful he is!

Even the tiniest speck of faith is enough to do what Jesus has asked me to do. All those sacrifices I’ve stressed over mean nothing if I don’t obey. And maybe if I obeyed I wouldn’t guiltily say yes to a thousand things He never asked me to do. Behold, to obey is better than sacrifice.